Article from The Guardian:

Explorers discovered the bones after squeezing through a fissure high in the rear wall of the Rising Star cave, 50km from Johannesburg, before descending down a long, narrow chute to the chamber floor 40 metres beneath the surface.

The entrance chute into the Dinaledi chamber is so tight – a mere eight inches wide – that six lightly built female researchers were brought in to excavate the bones. Footage from their cameras was beamed along 3.5km of optic cable to a command centre above ground as they worked inside the cramped enclosure.

The women recovered more than 1,500 pieces of bone belonging to at least 15 individuals. The remains appear to be infants, juveniles and one very old adult. Thousands more pieces of bone are still in the chamber, smothered in the soft dirt that covers the ground.

The leaders of the National Geographic-funded project believe the bones – as yet undated – represent a new species of ancient human relative. They have named the creature Homo naledi, where naledi means “star” in Sesotho, a local South African language. But other experts on human origins say the claim is unjustified, at least on the evidence gathered so far. The bones, they argue, look strikingly similar to those of early Homo erectus, a forerunner of modern humans who wandered southern Africa 1.5m years ago.

“We’ve found a new species that we are placing in the genus Homo, which is really quite remarkable,” said Lee Berger, a paleoanthropologist who led the work at the University of Witwatersrand in Johannesburg. He described the slender, small-brained creatures as “long-legged”, “pinheaded” and “gangly”. The males stood about 5ft, with females a little shorter.

Measurements of the bones show that the creature has a curious blend of ancient ape and modern human-like features. Its brain is tiny, the size of a gorilla’s. Its teeth are small and simple. The thorax is primitive and ape-like, but its hands more modern, their shape well-suited to making basic tools. The feet and ankles are built for walking upright, but its fingers are curved, a feature seen in apes that spend much of their time in the trees. The findings are reported in two papers published in the online journal eLife.

The Dinaledi chamber has been visited by explorers in the past, and the soft sediments in which the bones were found have been badly disturbed. Because the remains were not encased in rock, Berger’s team has not been able to date them. They could be 3m years old, or far more modern. No other animals were found in the chamber that might hint at when the human relative got there.

“If this is an ancient species, like a coelacanthe, that has come down through time and is only tens of thousands, or hundreds of thousands of years old, it means that during that time we had a complex species wandering around Africa, perhaps making tools. That would make archaeology very difficult, because we aren’t going to know who made what,” Berger said.

John Hawks, a researcher on the team, said that despite some of its modern features, Homo naledi probably belonged at the origins of our genus, Homo. “It’s telling us that evolutionary history was probably different to what we had imagined,” he said. Paul Dirks, another scientist involved, said that work was ongoing to establish the age of the bones. Some tests, such as carbon dating, will destroy the material, and will only be tried once the bones have been studied more closely. 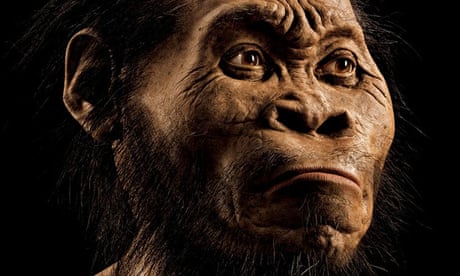 Without knowing the age of the bones, some researchers see the fossils as little more than novelties. “If they are as old as two million years, then they might be early South African versions of Homo erectus, a species already known from that region. If much more recent, they could be a relic species that persisted in isolation. In other words, they are more curiosities than game-changers for now,” said William Jungers, an anthropologist at Stony Brook School of Medicine in New York.

Christoph Zollikofer, an anthropologist at the University of Zurich, said that many of the bone characteristics used to claim the creature as a new species are seen in more primitive animals, and by definition cannot be used to define a new species. “The few ‘unique’ features that potentially define the new species need further scrutiny, as they may represent individual variation, or variation at the population level,” he said. Tim White, a paleoanthropologist at the University of California, Berkeley, goes further. “From what is presented here, they belong to a primitive Homo erectus, a species named in the 1800s.”

The Dinaledi chamber is extremely hard to access today, raising the question of how the creatures came to be there. They may have clambered in and become stuck, or died when water filled the cave. But Berger and his colleagues favour a more radical explanation. “We have, after eliminating all of the probable, come to the conclusion that Homo naledi was utilising this chamber in a ritualised fashion to deliberately dispose of its dead,” Berger said.

The conclusion is not widely accepted by others. “Intentional disposal of rotting corpses by fellow pinheads makes a nice headline, but seems like a stretch to me,” said Jungers. Zollikofer agrees. “The ‘new species’ and ‘dump-the-dead’ claims are clearly for the media. None of them is substantiated by the data presented in the publications,” he said. Hawks is open to other explanations, but said that disposal made sense. “The evidence really tends to exclude the idea that they entered the chamber one at a time, alive, over some time, because we have infants, small children, and very old adults who would almost certainly not have managed to get into this chamber without being deposited there.”

Chris Stringer, head of human origins at the Natural History Museum in London, said that how the creatures reached their final resting place was a “big puzzle”.

“If we’re talking about intentional disposal, we’re talking about creatures with a brain the size of a gorilla’s going deep into a cave, into the dark, and posting bodies through a small fissure into this cave chamber. It’s remarkably complex behaviour for what we’d think of as a very primitive human-like species. Whether there are other explanations remains to be seen, but it’s one of the plausible explanations,” he said.